The Prisoner of War Camp 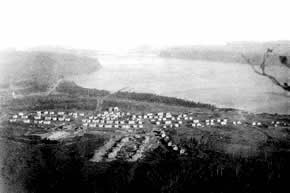 In 1940, the campsite abandoned by Lake Sulphite, was bought by the Canadian government and turned into a prisoner of war (POW) camp.  The camp, which encompassed area from Trout Creek in the north, to the railway tracks in the west and the Lake to the east, was surrounded by barbed wire fencing.  The 48 abandoned bunkhouses that had previously housed construction workers at Lake Sulphite Pulp and Paper Company became home to 1145 German prisoners for eighteen months.  Camp “R”, as it was called, came into being in July 1940 when prisoners were escorted from Quebec by the soldiers of the Fort Garry Horse Regiment.

Shortly after their arrival at Camp “R”, guard duty was assumed by members of the Canadian Veterans Home Guard, soldiers who had seen active duty during World War I.  Officers in charge of the camp lived at the Red Rock Inn and guards lived in the few houses that had been built in the late 1930’s.

Prisoners at the Camp were not all members of the German military, there were also merchant seamen and several German Jews.  This diverse group included Nazis and anti-Nazis.  This integration of people with opposite viewpoints caused a great deal of tension and discontent amongst the groups, and there were often disagreements that ended in physical fights.

During the 18 months the prisoners were interred at Camp”R”, several prisoners attempted to escape.  One prisoner was able to make his way to the United States only to be detained by U.S. authorities and returned to Camp “R”.  Another prisoner dug a tunnel near the road and probably would’ve been able to make a successful escape had someone not blown the whistle on him.  A third attempt ended in tragedy when one of the two prisoners was shot by a guard.

In October 1941 all the prisoners at Camp “R” were transferred to other internment locations and the site was closed. 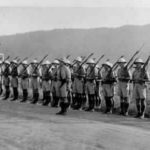 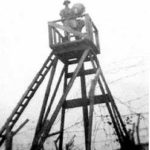 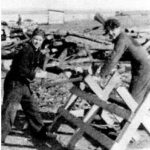 Back to The Early Days Street Scenes