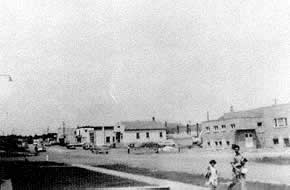 Prosperity and progress were the name of the game in the 1950’s as the community continued to develop and change.  Early in the 50’s, St. Lawrence Corporation became the operating company and expansion continued.  In 1953-54, a new Kraft machine, the largest in North America, was added.  The original machine was converted to produce newsprint and a new product division was created.

Expansion at the mill meant an increase in population, thus, a need for more housing not only for families but also for the single men which prompted the building of Bayview House in 1953.  By 1959, there were 260 houses in the townsite and living conditions had improved tremendously.

Sidewalks were installed, roads were paved and new buildings appeared.  In 1950, a new Post Office was built on Salls Street by Mr. H. Despins.  In 1952, St. Hilary’s Catholic Church at the corner of White Boulevard and Bakers Road officially opened.  In 1956, a new Municipal Office replaced the old jail at the corner of Salls and Steele.  This building housed not only the Municipal Office but also the public library and the fire and police departments.  Across the street, volunteers spent many hours building the Legion Hall.  Also in 1956, St. Hilary’s Separate School was completed and the Bank of Commerce moved to its new location.  The Red Rock Pharmacy opened its doors for business in March 1957.  After much discussion, the decision was made to locate a district high school in Red Rock and an eight room school was added to the townsite.

Back to Street Scenes Scenes of the 1950’s