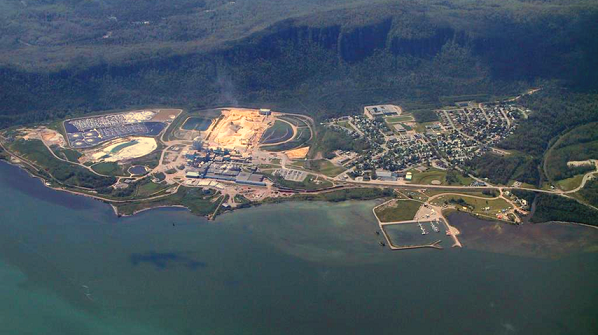 What community can say they were once the site of a Prisoner of War Camp?  Red Rock can.

What small Northern community can boast of being the hometown of a World Champion Curler?  Red Rock can.

What better time than during a 50th Anniversary Celebration to do some reflecting?  Reflecting about a community that has a relatively short but very exciting history.  One that has grown from a small, isolated rural community in the 1920’s into the thriving, active community we see today.  In the 1930’s a town site was literally carved from the forest at the edge of the lake and the natural resources of the area were utilized to create a community that has provided a good living and an enviable life style for many people.

Situated some sixty miles east of Thunder Bay, eight kilometres south of the Trans Canada Highway, Red Rock is nestled between the high, rugged cliffs of the Red Rock Hills to the north and west and the blue waters of Nipigon Bay to the south and east.  One would be hard-pressed to find a more beautiful setting for a town anywhere.  Anyone who has the fortitude to make the arduous climb to the top of the cliffs overlooking the town will tell you it is well-worth the climb to see the magnificent view of the Bay with the islands in the distance.

The area around Red Rock boasts some of the most spectacular scenery in the world.  The name Red Rock actually reflects its beautiful surroundings, having been named for the large red cuesta located on Hwy. 17 between Red Rock and Nipigon- by the way, “Cuesta” means long, sloping hills that end abruptly in steep cliffs.  The rugged, time-worn Early Precambrian rock base, which is overlain by the nearly flat-lying sedimentary and intrusive rocks of the Late Precambrian age, are some of the oldest rocks in the world and have their own story to tell.  There is a gap of about 1 500 000 years between the ages of these layers of rock.  What happened during that period of time is anyone’s guess, but one can assume there was a mountain range and a long involved history of erosion and upheaval.

The red base of the mountain is considered to be of volcanic origin and although the original lavas have not been located, they may have been removed by erosion or deposited on the floor of Lake Superior.  The sandstone ledges at the highest levels indicate the receding of the sea from the area and the mass of vertical rock standing on the top was most likely deposited there by glaciers.  These rocks are known to geologists as the Keweenawan formation.  The North Shore of Lake Superior, with its rugged terrain, abundant forests and sparkling rivers and streams, is unquestionably one of the most beautiful and historically-interesting

Back to Updating the Story In the Beginning